This Divine Intelligence, or Presence, is also referred to as “Karana” in The Secret Doctrine:

“The ever unknowable and incognizable Karana alone, the Causeless Cause of all causes, should have its shrine and altar on the holy and ever untrodden ground of our heart — invisible, intangible, unmentioned, save through ‘the still small voice’ of our spiritual consciousness.”

“Those who worship before it, ought to do so in the silence and the sanctified solitude of their Souls—making their spirit the sole mediator between them and the Universal Spirit, their good actions the only priests, and their sinful intentions the only visible and objective sacrificial victims to the Presence.”

“To the follower of the true Eastern archaic Wisdom, to him who worships in spirit nought outside the Absolute Unity,” H. P. Blavatsky says — “that ever-pulsating great Heart that beats throughout, as in every atom of nature — each such atom contains the germ from which he may raise the Tree of Knowledge, whose fruits give life eternal and not physical life alone.” -H. P. Blavatsky, SD 2-588

“Having sprung into being under the quickening influence of the uncreated beam, the reflection of the great Central Sun, that radiates on the shores of the river of Life, it is the inner principle in them which belongs to the waters of immortality, while its differentiated clothing is as perishable as man’s body. Therefore Young was right in saying that

“Angels are men of a superior kind”

“The Sun has but one distinct function; it gives the impulse of life to all that breathes and lives under its light. The sun is the throbbing heart
of the system; each throb being an impulse. But this heart is invisible: no astronomer will ever see it. -Transactions p.116

“Everything in the Universe, throughout all its kingdoms, is conscious,” says The Secret Doctrine, ” endowed with a consciousness of its own kind and on its own plane of perception. We men must remember that because we do not perceive any signs — which we can recognise — of consciousness, say, in stones, we have no right to say that no consciousness exists there. There is no such thing as either ‘dead’ or ‘blind’ matter, as there is no ‘Blind’ or ‘Unconscious’ Law. These find no place among the conceptions of Occult philosophy.”

“The whole order of nature evinces a progressive march towards a higher life. There is design in the action of the seemingly blindest forces.”

The Cosmos Is Guided

“The Universe is worked and guided from within outwards. As above so it is below, as in heaven so on earth; and man — the microcosm and miniature copy of the macrocosm — is the living witness to this Universal Law, and to the mode of its action.

“The whole Kosmos is guided, controlled, and animated by almost endless series of Hierarchies of sentient Beings, each having a mission to perform, and who — whether we give to them one name or another, and call them Dhyan-Chohans or Angels — are “messengers” in the sense only that they are the agents of Karmic and Cosmic Laws.

“All are entitled to the grateful reverence of Humanity, however, and man ought to be ever striving to help the divine evolution of Ideas, by becoming to the best of his ability a co-worker with nature in the cyclic task.”

“Each Entity must have won for itself the right of becoming divine, through self-experience,” Blavatsky says, and quoting Hegel, “the Unconscious evolved the Universe only ‘in the hope of attaining clear self-consciousness,’ of becoming, in other words, man—

“This is also the secret meaning of the usual Puranic phrase about Brahma being constantly ‘moved by the desire to create.’ This explains also the hidden Kabalistic meaning of the saying: ‘The Breath becomes a stone; the stone, a plant; the plant, an animal; the animal, a man; the man, a spirit; and the spirit, a god.’ The Mind-born Sons, the Rishis, the Builders, etc., were all men — of whatever forms and shapes — in other worlds and the preceding Manvantaras [Great Cycles].”

“Pythagoras taught that the entire universe is one vast series of mathematically correct combinations. Plato shows the Deity geometrizing. The world is sustained by the same law of equilibrium and harmony upon which it was built. The centripetal force could not manifest itself without the centrifugal in the harmonious revolutions of the spheres; all forms are the product of this dual force in nature.”

The Brain In Pain

Integral spiritual advancement, Theosophy teaches, can only occur while in a physical body. It’s a two-way street, and any damage, especially to the brain, hinders the expression of the Divine Ego. In “My Fair Lady” Eliza finally “gets it,” and is an apt metaphor — “the brain in pain won’t stay mainly (and healthily) on this plane,” and it is crucial that it does. We progress only “by self-induced and self-devised efforts,” according to the Third Fundamental Proposition of The Secret Doctrine.

The brain has spiritual centers such as the pineal glad. These are harmed by hallucinogens — these medications act as “meditation in reverse,” and the powers required for spiritual progress — meditation, concentration, and will — are thus severely hampered.

“Thus, to illustrate our case, we may designate the spirit as the centrifugal, and the soul as the centripetal, spiritual energies,” Blavatsky writes. And, “When in perfect harmony, both forces produce one result—break or damage the centripetal motion of the earthly soul tending toward the center which attracts it—arrest its progress by clogging it with a heavier weight of matter than it can bear, and the harmony of the whole, which was its life, is destroyed.”

“Individual life can only be continued if sustained by this two-fold force. The least deviation from harmony damages it — it is destroyed beyond redemption, the forces separate and the form is gradually annihilated.”

H. P. Blavatsky’s Teachers, the two Mahatmas of Mahatma Letters, were adamant on this issue:

“The God of the theologians is simply an imaginary power…. Our chief aim is to deliver humanity of this nightmare, to teach man virtue for its own sake, and to walk in life relying on himself instead of leaning on a theological crutch, that for countless ages was the direct cause of nearly all human misery…” (Mahatma KH)

“The Individuality … to run successfully its sevenfold downward and upward course has to assimilate to itself the eternal life-power residing but in the seventh [Spirit] and then blend the three (fourth, fifth and seventh) [Desire, Mind and Universal Spirit] into one – the sixth [Spiritual Individuality]. Those who succeed in doing so become Buddhas … The chief object of our struggle and initiations is to achieve this union while yet on this earth.” (Mahatma M)

“The Doctrine teaches that, in order to become a divine, fully conscious god, – aye, even the highest – the Spiritual primeval INTELLIGENCES must pass through the human stage. And when we say human, this does not apply merely to our terrestrial humanity, but to the mortals that inhabit any world, i.e., to those Intelligences that have reached the appropriate equilibrium between matter and spirit—as we have now…”

“But if we admit the existence of a higher or permanent Ego in us — which Ego must not be confused with what we call the ‘Higher Self,’ we can comprehend that what we often regard as dreams, generally accepted as idle fancies, are, in truth, stray pages torn out from the life and experiences of the inner man, and the dim recollection of which at the moment of awakening becomes more or less distorted by our physical memory.”

The brain-mind or personal ego, Blavatsky says, only “catches mechanically a few impressions of the thoughts, facts witnessed, and deeds performed by the inner man during its hours of complete freedom.  “The physical man cannot feel or be conscious during dreams,” she says, “for the personality, the outer man, with its brain and thinking apparatus, are paralyzed more or less completely.”

“For our Ego lives its own separate life within its prison of clay whenever it becomes free from the trammels of matter, i.e., during the sleep of the physical man,” she assures her students. And that it is “This Ego which is the actor, the real man, the true human self.”

“We might well compare the real Ego to a prisoner, and the physical personality to the gaoler of his prison. If the gaoler falls asleep, the prisoner escapes, or, at least, passes outside the walls of his prison. The gaoler is half asleep, and looks nodding all the time out of a window, through which he can catch only occasional glimpses of his prisoner, as he would a kind of shadow moving in front of it. But what can he perceive, and what can he know of the real actions, and especially the thoughts, of his charge?”

“The Higher Manas [mind] or EGO is essentially divine, and therefore pure,” Mme. Blavatsky writes: “— no stain can pollute it, as no punishment can reach it, per se, the more so since it is innocent of, and takes no part in, the deliberate transactions of its Lower Ego.”

“Yet by the very fact that, though dual and during life the Higher is distinct from the Lower, “the Father and Son” are one, and because that in reuniting with the parent Ego, the Lower Soul fastens upon and impresses upon it all its bad as well as good actions — both have to suffer…

“… the Higher Ego, though innocent and without blemish, has to bear the punishment of the misdeeds committed by the lower Self together with it in their future incarnation. The whole doctrine of atonement is built upon this old esoteric tenet; for the Higher Ego is the antitype of that which is on this earth the type, namely, the personality.” 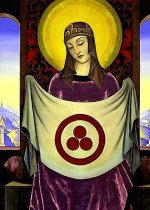 “This subject, being so very mystical, is therefore the most difficult to explain in all its details and bearings—since the whole mystery of evolutionary creation is contained in it. … every atom in the Universe has the potentiality of self-consciousness in it, and is, like the Monads of Leibnitz, a Universe in itself, and for itself.”

It is an atom and an angel.

One response to “Angels and Atoms”