IN a perfect world there should be peace and harmony between humans and with the kingdoms of Nature.

The keynote of Theosophist H. P. Blavatsky’s worldview is the just and moral treatment of all beings in the world.

The First Object of the Theosophical Society she founded is Universal Brotherhood without distinctions.

The central teaching of Theosophy has added support in The Secret Doctrine, the Summing Up section (#5), which declares:

“Everything in the Universe, throughout all its kingdoms, is conscious — endowed with a consciousness of its own kind and on its own plane of perception.”

Consequently, Mme. Blavatsky was adamant in opposing animal exploitation and cruelty. She spoke out forcefully against sport hunting, foxes, birds and big game, and most strongly against vivisection — animals used in biological experiments:

“If these humble lines could make a few readers seriously turn their thoughts to all the horrors of vivisection, the writer would be content.”

“Permanent tortures, daily inflicted on the poor brutes” — in her article Have Animals Souls? Mme. Blavatsky wrote — “after calling forth an outburst from society generally, will force all Governments to put an end to those barbarous and shameful practices.“

“Man is endowed with reason, the infant with instinct, and the young animal shows more of both than the child.”

The two oldest religions, Hinduism and Buddhism, Mme. Blavatsky said, “regard the animal world, from the huge quadruped down to the infinitesimally small insect, as their ‘younger brothers.’”

“A wretched lot is that of poor brute creatures, hardened as it is into implacable fatality by the hand of man,” she wrote. “The human being seems born to become the murderer of the animal.”

We Humans can be surprised and confused when we notice an animal behaving like us. We also tend to be especially reluctant to credit them with any human-like intelligence.

But students of Theosophy see in the phenomena evidence of a far grander view of evolution. From their studies serious students recognize that all evolution is “triple” – i.e., physical, mental, and spiritual.

“In In the African jungle, conservationist Damian Aspinall searches for Kwibi, a lowland gorilla he hasn’t seen for 5 years. Kwibi grew up with Damian at his Howletts Wild Animal Park in England. When he was five, he was released into the forests of Gabon, West Africa as part of conservation programme to re-introduce gorillas back into the wild. Now Kwibi’s 10 years old, much bigger and stronger. Will Damian find him? Will Kwibi attack him?” 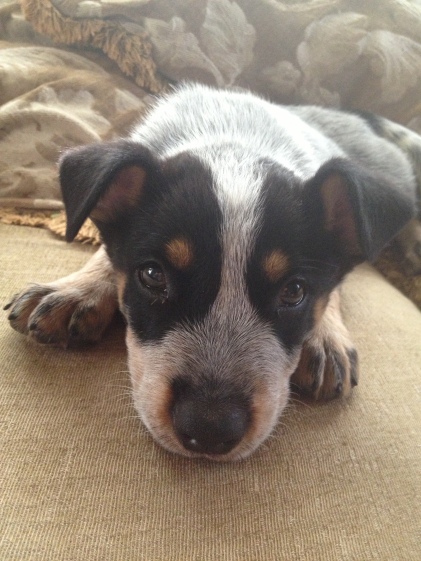 “I am confident that there truly is such a thing as living again, that the living spring from the dead, and that the souls of the dead are in existence.”

Most of you will know that we have a new pup, Harry, in our household. You might also be aware that we lost our beloved dog Charlie at the beginning of September, after a wonderful 17 years of friendship and family.

I’m beginning to wonder if these two beautiful boys might be one and the same.

When I first met Harry last week he boldly walked over and climbed into my lap. He seemed to be uncommonly comfortable with me, and since I brought him home this young dog hasn’t spent a moment fretting over his mum (he was unweaned) or his litter mates. I’ve never known a puppy to behave like this.

When we arrived at our home in Brisbane for the first time, Harry seemed confident of where he was. As soon as I put him down in the hallway he ran to the kitchen, took a drink of water, and then raced outside and around the corner of the house to a patch of grass where Charlie liked to wee. That was odd, I thought to myself. How did he know where to go?

He greeted Ben (my husband) and Bert (our other dog) jubilantly, and fell right into family life. Except that he asserted himself in the dog pecking order. He might be small, but Harry is playing Boss, and Bert seems happy to go along with that behaviour.

Down here at the farm, there have been other uncanny co-incidences.

On our first night Harry knew where our bedroom was, and took himself straight to bed. Just like Charlie used to, when he became crotchety and old, the very small Harry arranged himself right in the middle of the very big double dog bed. Oh no, we said. This looks familiar.

Sure enough, whenever Bert tried to get onto the bed, Harry would roll over and snap at Bert’s nose until Harry had the bed to himself, and Bert sighed resignedly and moved back onto the carpet. (After three nights they’ve made up now, and sleep cozily together).

During the day, when Harry needs a nap, he sneaks into our bedroom, pulls all of Ben’s underpants out of the dirty clothes hamper and makes a nest to sleep on – just like Charlie used to do. He also hides Ben’s undies to sleep on later, when we are going to bed at night.

Charlie did that for years too. In fact, we buried him with a pair! He doesn’t like to walk out into the rain to go to the toilet (neither did Charlie) and will do anything to find a nice dry spot for his ablutions.

He knows where to sit to get fed for breakfast, and no-one told him that either. He went straight to Charlie’s old spot, sat down like a good boy, all smiles and waggy tail, waiting expectantly for his meal.

He steals Bert’s toys and then lies on top of them all and snaps menacingly if Bert comes near. This sounds mean, but he only does it for a minute or two, as if it’s a big game. It’s exactly what Charlie used to do when he was getting older and he didn’t want to run and chase the ball, or the stick, or the frisbee. That worked for a 28 kilogram fully grown dog, but there’s something funny about a 3.5kg dog pulling off the same stunt!

Harry is obsessed with ants. He lies by the pool in the cool shady grass, watching intently and then sucking them up like an anteater. Yes, Charlie did that to. He lies down on the same spot on the side veranda. He doesn’t let Ben or Bert out of his sight. And when I meditate he comes and lays down in my lap. Just like Charlie did.

There’s something very knowing about this little pup. He’s a wise old soul in a spanking new body, that he seems delighted to test out and show off!

I think of my dear old friend Charlie… 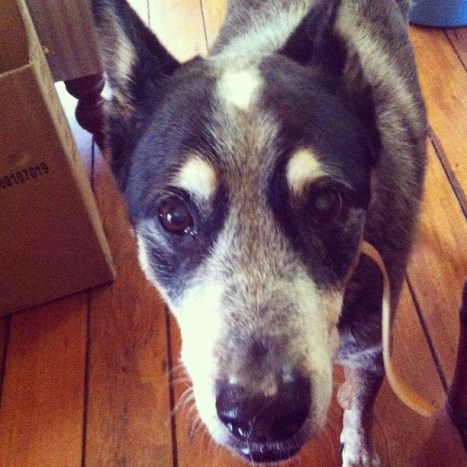 Charlie, just weeks before his death.

Then I look at this new, lively ball of fluff, and I am sure that our old friend has come back to us.

I have had more than one example of reincarnation during my working life as a psychic thus far – you can read about one of those instances here:

The baby who needed to speak…

So, what about pets? Well, I can see that they have souls and auras, just like people. I’ve written about that here too:

The Elephant Elder of Chiang Mai

Surely it’s not such a leap? What do you think?

Our beautiful and wise dog, Charlie.

4 responses to “Animals – Our Younger Brothers”