Queen of the Sun: What Are the Bees Telling Us?

MILLIONS of years ago, the ancient sages taught, man and all the kingdoms of nature existed as prototypes.

They gradually developed in the womb of Gaia, Mother Earth, gestating in their formative stage before birth onto this plane of existence.

The living spiritual prototypes were held in an invisible astral matrix, a semi-physical energy field, The Secret Doctrine explains.

This field is the astral projection of the eternal akasic field, the storehouse of all pre-evolutionary blueprints of former worlds.

As they develop the prototypical forms are likened to a living fetus suspended in the ocean of its mother’s womb. There was no ‘solid matter’ as we know it in those developing astral times, more than 300,000,000 years ago it is taught.

Guiding the process is an intelligent hierarchy of spiritual parent-beings, a “hive-mind” at work behind-the-scenes, says The Secret Doctrine, a Mind busily retrofitting the numerous forms of nature and man—preparing them to be reborn on the to-be new Earth, guided by immutable cyclic laws. (Differentiation of Species-Missing Links.)

Just as Earth mother nourished and birthed innumerable beings in the faraway past, the same grand evolutionary scheme is mirrored today in the differentiation of the human fetus— stages that traverse single-celled zygote, which becomes a mass of cells known as a blastocyst.

Science rejects everything except “mechanical laws,” Blavatsky wrote (SD 2:660), “and admits of no principle outside matter.” Occult Science on the other hand, “allows the human physical frame to have passed through every form, from the lowest to the very highest, its present one.” 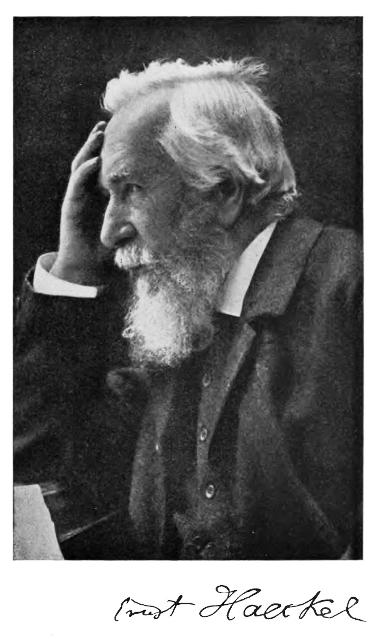 Ironically the process supports both the intelligently guided evolution of occultism, and the random materialistic Darwinian model. Take your choice.

This video excerpt of an interview with Duane Elgin, an internationally recognized, visionary speaker and author. Elgin pleads the ways in which it makes a profound difference whether we regard the universe as either dead or alive at its foundations. (Produced by the Global Oneness Project and directed by Emmanuel Vaughan-Lee.)

For example, the beginnings of gill clefts appear in both humans and fish. Day by day mineral, plant, animal and human kingdoms are all represented sequentially over a relatively short period as the developing fetus takes shape from a tiny egg, invisible to the naked eye.

Just 12 days after fertilization, the cells destined to become the fetus turn into something else first: the embryo. By month’s end, this embryo is about the size of a grain of rice, and it looks more tadpole than human, sporting a tail where legs should be.

“The path of spirituality turns, corkscrew-like, within and around physical, semi-physical, and supra-physical evolution.”

There was also a critical cycling in Earth’s development, when a relatively rapid appearance of forms occurred, “seemingly abruptly and from nowhere.” Nearly all of the major phyla in the animal kingdom appeared in a sudden burst of evolution. 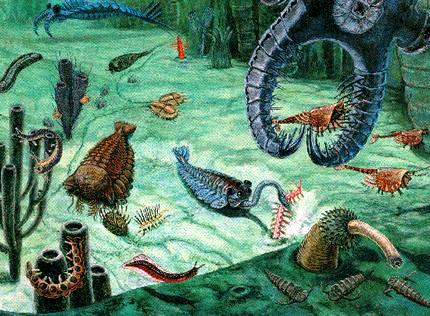 This was during the Cambrian explosion and is memorialized in the fossil record — a record which sorely vexed Charles Darwin with his slow, predictable, though random evolutionary theory, and still generates extensive scientific debate today.

The phenomenon represents for Theosophists, however, prima facie evidence of the universal gestation on invisible spheres, as is described by Occult evolutionary science in The Secret Doctrine.

But, according to The Secret Doctrine (2:52), “nature unaided fails,” and the long period of ancient evolution was neither random or blind. On the job at the same time were highly evolved intelligent beings who assisted in transferring and reorganizing the many root-types carried over from an older system.

The duties of those ancient hierarchies, called Dhyanis, consisted of “alteration and addition,” wrote W. Q. Judge in The Ocean of Theosophy (Ch.15),

“which resulted in the differentiation afterwards, on this gross plane, into the various families, species, and genera.”

“According to the doctrine of Universal Evolution expounded by the Sages of the Wisdom-Religion,” wrote W. Q. Judge in An Epitome of Theosophy, “the mineral, vegetable, and animal forms each imprison a spark of the Divine” — a fact that all indigenous peoples, children, and naturists like Thoreau inwardly knew. 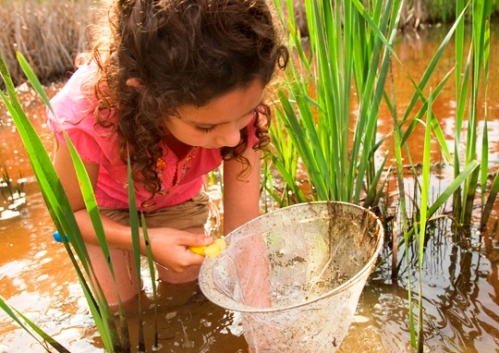 Additionally, a few more developed entities were transferred to the newly forming Earth already in finished form, occult science maintains, requiring no prolonged evolution. “Neither the bee nor the wheat had their original differentiation in this chain of globes,” Judge remarked cryptically:

“but must have been produced and finished in some other [globe] from which they were brought over into this.”

Judge declined to give details, but divine hierarchies would have known better than to reinvent the wheel. Evolutionary adaptation was not needed for the honeybees, apparently, who must have hit the air flying.

It was an otherworldly gift to Gaia our Earth. Billions of pollinators arrived on the scene, apparently, fully formed and functional — delivering their perfectly matched services just as millions of plant species emerged requiring them. An impossible puzzle for materialistic evolutionists the neo-Darwinists.

“There is an inherent law — not only in the primordial, but also in the manifested matter of our phenomenal plane — by which Nature correlates her geometrical forms,” H. P. Blavatsky wrote in The Secret Doctrine (1:97): “and later, also, her compound elements — in which there is no place for accident or chance.”

“Man with his free will often records the ephemeral and personal, but the builder bee fashions only the one ideal form, which describes the divine work of the Manifested Logos,” [Reference article: “The Bee“]:-

“In the honeycomb of the bee lies the symbol of its Eternal Record.”

Sadly, modern humans have become notorious despoilers of Nature’s divine harmony. Known as Colony Collapse Disorder, a man-made disaster, honeybees have been mysteriously disappearing across the planet — literally vanishing from their hives without a trace. 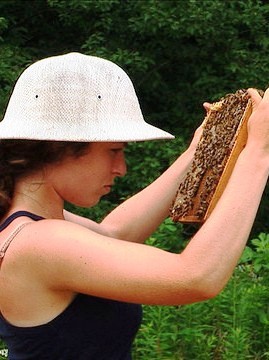 Queen of the Sun

“Queen of the Sun: What Are the Bees Telling Us? takes a fresh look at the global bee crisis, from multiple angles, and offers proactive life-affirming solutions. Certain pesticides called neonicotinoids have been identified as having a particularly devastating impact on bee health and survival by weakening the bee’s immune system. Monoculture—the practice of growing of just one type of crop on a massive scale—is another major contributing factor. Suggestions for actions you can take to help our honey bees are included, as well as resources for educators.” (Mercola.com)

QUEEN OF THE SUN: What Are the Bees Telling Us? is a profound, alternative look at the global bee crisis from award-winning filmmaker Taggart Siegel, director of REAL DIRT ON FARMER JOHN. Taking us on a journey through the catastrophic disappearance of bees and the mysterious world of the beehive, this engaging and ultimately uplifting film weaves an unusual and dramatic story of the heartfelt struggles of beekeepers, scientists and philosophers from around the world including Michael Pollan, Gunther Hauk and Vandana Shiva. Together they reveal both the problems and the solutions in renewing a culture in balance with nature. 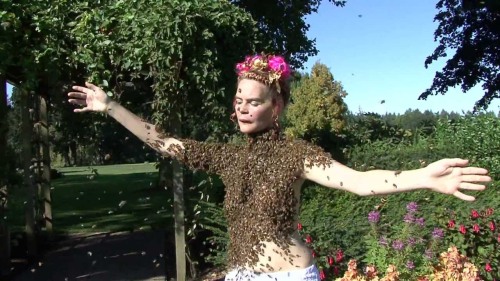 With full colour, stunning photography throughout, this engaging anthology presents a wealth of original essays, interviews and poems that offer unique philosophical and spiritual insights. Besides investigating many contributory causes of Colony Collapse Disorder, the book offers remedies as well as hope for the future.

2 responses to “Queen of the Sun: What Are the Bees Telling Us?”