Instant Karma and the Revolutionary Case of Bridey Murphy

THEOSOPHY students of a certain age 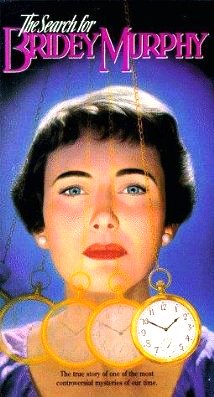 might remember the famous and mysterious  1950’s reincarnation case of “Bridey Murphy.”

We re-present it now briefly in keeping with our blog’s subhead, the heading created by H. P. Blavatsky in The Secret Doctrine, i.e. “Ancient thought in modern dress.”

The hypnotist  Morey Bernstein of Pueblo, Colorado, was working with one of his clients, a twenty-nine-year old housewife and mother named Virginia Tighe when, during one of their sessions, she spoke with the voice and memories of a nineteenth-century Irishwoman named Bridey Murphy.

With this case, the reincarnation genii jumped right out of its metaphysical bottle and into popular consciousness.

This case was, and still is, a powerful reinforcement of the theoretical teaching of Reincarnation — not just leaving the idea hanging intellectually, dogmatically, and blindly, in the minds of modern students. Bernstein’s book about the case was a sensational best seller in 1956, followed by equally wildly popular movies.

One could hardly imagine a better case for reincarnation, together with the doctrine of Karma promoted by the Beatles 1970 song “Instant Karma.”

“In an Irish accent, she told Bernstein that she, Bridey Murphy, had been born in 1798 and died in 1864 of complications from a broken hip. Virginia Tighe herself was born in the Midwest in 1923, had never been to Ireland, and did not speak with even the slightest hint of an Irish accent.

“The first time the event occurred, Bernstein had been trying to help Tighe to remember her childhood, and had casually suggested that she ‘go to some other place in some other time.'” says the reviewer. “He meant for her to remember some other period of her life, but instead Tighe seemed to jump to the life of someone else who had lived long before.”

“In this and subsequent hypnosis sessions, she also provided Bernstein with numerous details about her family, experiences, likes and dislikes. For example, she gave the name of the Catholic church in Belfast, Ireland, where she had married Sean Brian Joseph McCarthy in 1818 and offered detailed descriptions of places where she had shopped for food.

She also told Bernstein about the time in-between lives, when the spirit waited for a new existence. During this period, she said, she could travel anywhere with just a thought.”

“The Search for Bridey Murphy”

Whatever the explanation for her ‘memories’ — whether connecting with the life images of a another person preserved in the astral light, or with her own past life — there would have to be a medium or matrix to hold that information, analogous to the way a computer stores programs on its hard drive.

It would be an astral or akashic substance, or what Blavatsky called the “Waters of Space” or “Universal Matrix” — (Secret Doctrine 1:62):

“The ever (to us) invisible and immaterial Substance present in eternity.”

“Like turning back the pages of a book,” amateur hypnotist Morey Bernstein told the Colorado housewife. “I’m going to turn back, turn back through time and space—and when I next talk to you, you will be seven years old.”

“The famous Bridey Murphy case not only remains one of the most famous past-life memory cases on record but is also notable for being one of the few that has been both successfully debunked and subsequently ‘un-debunked’ (a double debunking?)

“Though savaged by its critics within months of the stories release in 1956, it has managed something of a rebound among reincarnationists over the years, who have been able to punch holes in the skeptic’s best explanations for the mysterious Bridey Murphy’s apparent recall of a full life lived in nineteenth century Ireland. Even the venerable Dr. Stevenson—considered by many the most practical and objective of the reincarnationist investigators—accepts the Bridey Murphy case as credible, despite the decades of debate that has raged around it.” UnexplainedMysteries.com

‘Learn, then, well the doctrines of Karma and Reincarnation, and teach, practice, promulgate that system of life and thought which alone can save the coming races. Do not work merely for the Theosophical Society, but through it for Humanity.”