THE perennial philosophy assures us that compassion is far from a gushy sentimentalism, or an intellectual idea.

More than a gut feeling, it is rather a universal, non-sectarian, non-dual energy — the primal oneness undertone of Life.

The Voice of the Silence declares it to be foundational heart energy, “the LAW of LAWS.”

We already share, as humanity, the core values of caring for others less fortunate. Rooting for the underdog comes naturally to us.

But, the prefix ‘com’ (with: together: jointly) raises com-passion to a level far above the acquisitive passion of the selfish and greedy — and the evil desire that dries up the Earth’s human and natural resources for individual and corporate profiteering.

“There is an urgent need for a new focus,” the global coalition Charter for Compassion seeks to remind the world — and to bring together “voices from all cultures and religions.”

The realization of universal brotherhood was championed by H. P. Blavatsky throughout her life, and is the First Object of the Theosophical Society. (Thoughts That Count)

There is, Blavatsky notes:

“A great psychic and spiritual change now taking place in the realm of the human soul.” 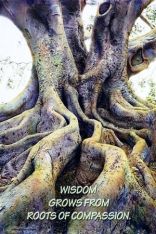 “Sometimes, a hug is all what we need,” says The Free Hugs Campaign. “Free hugs is a real life controversial story of Juan Mann, A man whose sole mission was to reach out and hug a stranger to brighten up their lives.”

In this age of social disconnectivity and lack of human contact, the effects of the Free Hugs campaign became phenomenal.

“As this symbol of human hope spread across the city, police and officials ordered the Free Hugs campaign BANNED. What we then witness is the true spirit of humanity come together in what can only be described as awe inspiring:”

Confucius and Plato, belonged psychically, mentally and spiritually to the higher planes of evolution,” Blavatsky maintained, and “Gautama Buddha —Wisdom incarnate — was still higher and greater.”

She saw that the seeds of a future Spiritual Evolution lay imprisoned alive in the heart of humanity. That growth was temporarily stifled in the Twentieth Century with the rise of wars, industrial greed, social strife, bigotry, crime and prejudice.

Now, despite it all, social reformer Karen Armstrong sees evidence of a vitalizing “ethical alchemy” on the rise.

The Charter for Compassion speaks to the Ideal in straight-forward, practical terms, as did H. P. Blavatsky, who wrote “… the essence of Theosophy is the perfect harmonizing of the divine with the human in man, the adjustment of his god-like qualities and aspirations, and their sway over the terrestrial or animal passions in him.”

The Charter brings together the voices of people from all religions. “It seeks to remind the world that while all faiths are not the same,” but “they all share the core principle of compassion, and the Golden Rule.”

“The Charter seeks to change the conversation around religion, and will be a clarion call to the world.”

“Whoever feels his heart beating in unison with the great heart of humanity, whoever feels his interests at one with those who are poorer and less fortunate than himself,” Blavatsky wrote in The New Cycle —

“Whoever, man or woman, is ever ready to lend a helping hand to those who suffer, whoever is fully conscious of the real meaning of ‘Egoism,’ is a Theosophist by birth and by right.”

The sea change in humanity that Blavatsky foresaw “is quite remarkable” she said. It is a call to spiritual awakening which may be realized, finally, in our own Century. “Verily the Spirit in man,” she declared in her own time,

“so long hidden out of public sight has at last awakened. It now asserts itself and is loudly re-demanding its unrecognized yet ever legitimate rights. It refuses to be any longer trampled under the brutal foot of Materialism, speculated upon by the Churches.”

In words that are sorely needed today, she continues:

“Take advantage of, and profit by, the ‘tidal wave’ which is now happily overpowering half of Humanity,” she said, and “speak to the awakening Spirit of Humanity, to the human Spirit and the Spirit in man, these three in One and the One in All.”

Her soaring prose, however, bore a cautionary footnote. “But woe to the XXth century,” she warned, “if the now reigning school of thought prevails, for Spirit would once more be made captive and silenced till the end of the now coming age.”

The Twentieth Century indeed found humanity held hostage—by two world wars and threats of war, and by suffering, disease, poverty — culminating today in a reign of terror, remembered only in the Medieval Dark Ages of burnings and beheadings.

Activating deep yearnings of the Soul for peace and harmony, is all that can save us from extinction.

The tidal wave of deeper souls,
Into our inmost being rolls,
And lifts us unawares,
Out of all meaner cares.

“To a large extent, the way we think determines who we are and what happens to us.”

“We cannot harbor poisonous thoughts without their effects visibly showing in our lives. If we dwell on our inadequacy and ineffectiveness, for example, circumstances will prove us correct because we will invite self-defeating events to us.

“On the other hand, replacing destructive thoughts with hope-filled, optimistic ones brings peaceful and confidence-producing circumstances to us. We will radiate competence and joy.”

“We would be wise, therefore, to take the advice of twentieth century author Orison Swett Marden:

‘Stoutly determine not to harbor anything in the mind which you do not wish to become real in your life. Shun poisoned thoughts, ideas which depress and make you unhappy, as instinctively as you avoid physical danger of any find – replace all these with cheerful, hopeful, optimistic thoughts.

‘Today I will make it a habit to continually replace pessimistic thoughts with optimistic ones. I will dwell on what is uplifting so that I may increase my courage and confidence as well as better my circumstances.’

[Above are excerpts from the book The Reflecting Pond, by Liane Cordes]

The Reflecting Pond is a collection of meditations that takes one subject at a time and covers it in depth. Whether we have a concern about self-acceptance, fear, friendship, or love, there is a chapter full of understanding thoughts. Used as an extra dose of support on specific issues, this book will help us think through day-to-day living problems.

“The second objective of the Theosophical Society is the study of the world’s religions, philosophies, and sciences,” writes David Pratt. And, “Blavatsky played a pioneering role in introducing the west to the sacred traditions of the east”:-

“She also provided insights into the deeper meaning of myth, allegory, and symbolism. When stripped of their later dogmatic accretions, the world’s religions are found to have more similarities than differences: they recognize that our essential self is fundamentally identical with the Universal Self…

“They advocate the golden rule of universal love; and they speak of enlightened teachers — Krishna, Buddha, Christ, etc. — who have appeared on earth at different times and restated some of the fundamental spiritual values.”

Excerpt from a talk by John Algeo of The Theosophical Society explaining how religion became a hindrance to humanity’s spiritual evolution instead of a healing force.

TODAY, the Spirit in man has returned like King Lear, from seeming insanity to its senses – and, raising its voice, it now speaks in those authoritative tones to which the men of old have listened in reverential silence through incalculable ages, until deafened by the din and roar of civilization and culture, they could hear it no longer. . . .

Look around you and behold! Think of what you see and hear, and draw therefrom your conclusions.

The age of crass materialism, of Soul insanity and blindness, is swiftly passing away.

A death struggle between Mysticism and Materialism is no longer at hand, but is already raging. And the party which will win the day at this supreme hour will become the master of the situation and of the future – i.e., it will become the autocrat and sole disposer of the millions of men already born and to be born, up to the latter end of the XXth century.

And facing the hitherto domineering flood which is still steadily carrying off into unknown abysses the fragments from the wreck of the dethroned, cast down Human Spirit, they now command:

“So far hast thou come – but thou shalt go no further!”

Amid all this external discord and disorganisation of social harmony; amid confusion and the weak and cowardly hesitations of the masses, tied down to the narrow frames of routine, propriety and cant – amid that late dead calm of public thought that had exiled from literature every reference to Soul and Spirit and their divine working during the whole of the middle period of our century – we hear a sound arising.

Like a clear, definite, far-reaching note of promise, the voice of the great human Soul proclaims, in no longer timid tones, the rise and almost the resurrection of the human Spirit in the masses.

It is now awakening in the foremost representatives of thought and learning – it speaks in the lowest as in the highest, and stimulates them all to action. The renovated, life-giving Spirit in man is boldly freeing itself from the dark fetters of the hitherto all-capturing animal life and matter.

Declan Galbraith: “Tell Me Why”

Declan was born on December 19, 1991 in ENGLAND, of Scottish AND Irish origin. More about him and his songs, can be found on his official website: http://www.declan-galbraith.co.uk/

WHOEVER feels his heart beating in unison with the great heart of humanity,

WHOEVER, man or woman, is ever ready to lend a helping hand to those who suffer,

WHOEVER is fully conscious of the real meaning of “Egoism,” is a Theosophist by birth and by right.

If it is objected that in it the atheist rubs elbows with the deist, and the materialist with the idealist, we answer: “What of it?”

What matters the passing form if the goal pursued is the same Eternal Essence, whether that Essence appear to human perception under the guise of a Substance, of an immaterial Breath, or of a No-thing!

Let us admit the PRESENCE, whether called Personal God or Universal Substance, and let us admit a cause, since we all see effects.

In the final analysis, the greatest of materialists, as well as the most transcendental of philosophers, admits the omnipresence of an impalpable Proteus, omnipotent in its ubiquity throughout all kingdoms of nature, including man – a Proteus indivisible in its essence, without form and yet manifesting itself in all forms—

Which is here, there, everywhere and nowhere, which is the All and the Nothing, which is all things and always One, Universal Essence which binds, limits and contains everything, and which everything contains.

Not only humanity– even though consisting of thousands of races – but all that lives and vegetates, all that in one word is, is made up of the same essence and substance, is animated by the same spirit, and that, therefore, there is solidarity throughout nature, on the physical as well as on the moral plane.

We have already said in the Theosophist:

“Born in the United States of America, the Theosophical Society was constituted on the model of its mother country. The latter, as we know, omits the name of God from its constitution, lest, said the Fathers of the Republic, this word someday afford the pretext for a State religion – for they wanted to grant absolute equality in its laws to all religions so that all would support the State and all in their turn would be protected.”

The Theosophical Society was established on this beautiful model. 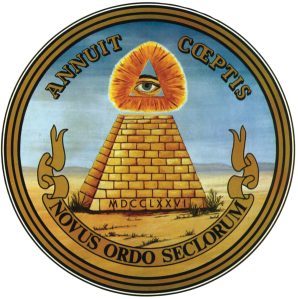